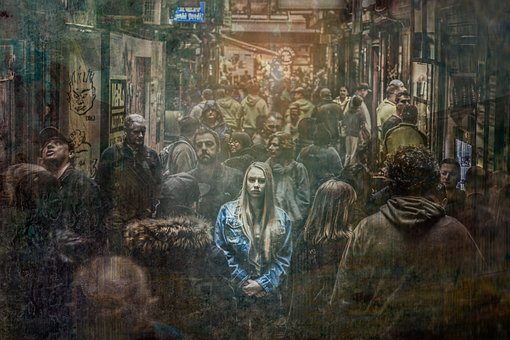 Please, there’s no need to self-identify, because most who have suffered many things but do not feel free to share what they feel they have not completely dealt with.

The issue here is much of grief cannot easily be spoken about. It leaves the common person feeling uncomfortable, besides the fact that the grieving person doesn’t want to expose themselves emotionally unnecessarily. It is easier in many ways to deny what is clearly clear; to keep moving forward.

But without dealing with the past,

The future can often remain clouded by it.

Another matter can be raised:

The most traumatic part of despair.

I know so many people who weren’t so much traumatised by their first loss experience, but were actually traumatised more by how they were dealt with, whether it be the clichéd remarks from people who should know better, or from a response or lack of response from people they’d come to trust.

Sometimes it’s the stress within the family environment that causes the household to implode. Things said in the heat of the moment, or maybe something well intended but poorly communicated. Tenuous relationships become fractured because smaller more tolerable conflicts that occurred previously, but were not dealt with, reveal pre-existing cracks within the relationship. Relational breakage occurs.

Whether it be the internal conflict

Of not being able to reconcile the reduction,

Or external conflicts because of misunderstandings,

And often a combination of these.

Add to this, battle we can have with God –

There’s a silence in grief that’s deafening in its harrowing quietude. So many individuals suffer in silence. So many people can’t get the healing that they could do with. And so many households continue on this winding road of malfunction because truths of reality cannot be spoken of as truths of experience.

Somehow there’s grief, and quite a lot of it, that cannot be discussed or processed or expressed. Sometimes people would engage in counseling, but are put off by the cost, whether it be financial or emotional or time or other.

My wife and I are presently preparing to present at a Silent Grief convention where the focus is on exactly this topic: the despair that’s not generally spoken about. The grief we’re expected to proceed from. The kind of grief that does not rate much of a mention because it’s so comparatively common, or worse, since there’s deep shame attached to it.

It’s precious in our view

That we have had the experience

We never needed to lose him,

We genuinely saw God moves in many, many ways, not least by the prayers of the faithful, and also the testimony of our faith at the moment, even as we witnessed it .

While he never breathed outside the womb.

And yet, just like possible, I feel guilty for speaking about it too much, even though that has not stopped me. I know some folks will be thinking that.

But There’s no overriding drive in me to think for the needs of this woman and man who need space for their voice; people who want to be heard; or just those who need to be acknowledged:

We wish to say, your grief matters.

That it is incredibly significant.

That you are allowed to feel gutted,

even years or decades on.

And, that you are allowed to feel recovered.

We never ought to suffer in silence, but inevitably we do, since this world thrives on success stories and does not seem to enjoy stories with a bad ending. There is an exception to this, of course, once the bad ending can be redeemed. And that is why grief needs to be a topic we can speak about, because processing our despair is the best way to redeem what God has for us because we have suffered.

There are no wrong or right ways for managing the truth in our grief.

The grieving person needs to hear that it is normal to grieve, just as it is normal for the sting of loss can never fully diminish, and that it takes courage to get open emotionally.

They must also hear that there is hope beyond the intensity and immensity of despair; that reduction is an integral part of the growth process.

As if we don’t care,

as to give it a voice,

That gives us a choice.